Analysed illustrations and a short story from Roué 9 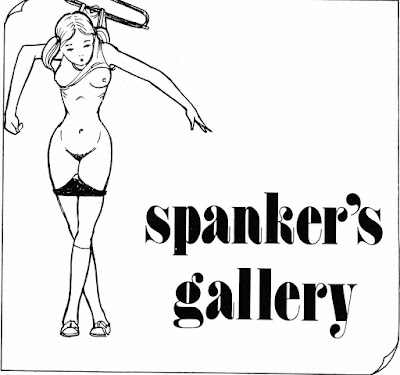 The most ubiquitous inhabitants of spanking stories and spanking art concerned with domestic discipline are uncles. Uncles are the most flexible characters, and an uncle can be invented to fulfil any role, from that of surreptitious pincher of girl’s bottoms to ravisher of innocents and/or bastion of middle-class decency and disciplinarian bulwark against the temptations facing a young girl in the immodest world of today.
Uncles tend, by and large, to be conservative, respectable and lecherous, a combination of attributes which allows them to preach against the undisciplined tendencies of a Modern Miss while simultaneously revelling in the taking down of her pants, and getting away with it meanwhile by harking back to ‘the old days’ and muttering things such as — ‘spare the rod’ — and, ‘it didn’t do me any harm’. Uncles, then, are indulged by those who might be in a position to criticise, while themselves being ideally situated to take advantage of the Modern Miss’s obliging habit of providing endless reasons why she ought to have her pants taken down. If the authors of spanking stories are to be believed, uncles are responsible for more wear and tear on teenage girls’ knicker-elastic than any other single factor.
Bona-fide now established, Uncles may be classified according to type.
An uncle is anyone, providing he be conservative, respectable and lecherous, who has legitimate or quasi-legitimate access to that part of the Modern Miss’s anatomy most frequently described in spanking literature; i.e. the portion occasionally covered by those oft-lowered and most regularly mentioned items of feminine underwear, her knickers.
Sub-types of uncle range throughout the following: actual uncles, nosey neighbours, boyfriends of Modern Miss’s mum, friends of the family and the occasional randy clergyman. Of these, ‘friends of the family’ are the most popular, while ‘randy clergymen’ get away with more by virtue of their calling.
Modern Miss’s eligibility for a potential smacked bottom it almost always established by one or more of the following factors: her mum and dad are in Australia; she hasn’t got a dad and her mum can’t control her/ works evenings in a pub/ is an idiot and doesn’t think there is anything odd about uncle taking her daughter’s knickers down every evening while the family watch television. Modern Miss also tends to be subtle, just over the age of consent, clumsy, untidy, pretty, a virgin, lazy around the house and gets the most dreadful school reports.
Provided with any combination of the above, uncle is free to pursue his hobby of chastising errant teenage bottoms.
----//---- 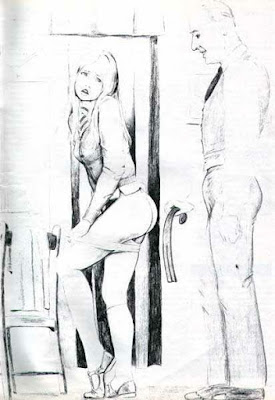 This illustration, even without words, tells the story perfectly. The expressive pucker of the girls’ eyebrows, the parting of her lips, her very posture, conveys the nervous unwilling compliance which the treat of the strap has wring from her, while ‘Uncle’s’ evident control of the situation and his enjoyment of this control leaves us with no doubts that the unlucky young lady is in for a well-applied strapping and her uncle is in for a very enjoyable fifteen minutes indeed. This girl won’t take her tanning easily — she’ll certainly protest at every spank, will gasp and pant and eventually cry while her saucy young bottom turns a delicate shade of lobster. Whatever the reason for her punishment we may be sure she won’t incur her uncle’s wrath again if she can possibly help it; yet a glance at her uncle tells us just as surely that, however well-behaved and obedient this young lady tries to be, there will always be some excuse why her pants have to come down and her unfortunate bottom has to dance to the music of the tawse again.
----//---- 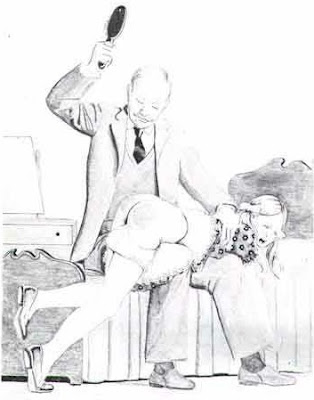 This drawing, though simple enough in essence and giving only the barest information, a young girl having her bottom spanked; manages nonetheless to convey a certain atmosphere. Probably this atmosphere will indicate different things to different people; to me, by virtue of its spaciousness, it’s single-mindedness, the concentration on the sole object of both the man’s and the girl’s attention — the smart in her bottom — it suggests a punishment rather than a piece of self-indulgence on the part of ‘Uncle’.
The girl herself is clearly on the point of losing her self-control. Her hand clutches unknowingly at her uncle’s trouser leg, clinging to something, anything, as a drowning man might clutch at a straw. She is desperate, she is going under; uncontrollable tears roll down her cheeks, her scorched, tender bottom lifts involuntarily to the descending brush, her hips bounce unwillingly to the rhythm of her spanking, her legs snatch this way and that and her toes thrust spasmodically into the bedroom carpet. Every nuance of her anguished posture betrays her nearness to the imminent humiliation of bawling for mercy.
The man on the other hand is clearly in complete control. This young lady is going to blubber, and serves her right! His expression, though intense, is still calm. His hair is unruffled, his clothes a still neat, and his grasp of the hairbrush is firm and determined. The girl across his lap is going to toss and wriggle for quite a bit longer before he is satisfied that she has been properly dealt with.
A glance round the room completes the picture. Although we cannot see beyond the edge of the picture frame we know that there is no chance of anyone interrupting and thus rescuing this tearful girl from the consequences of her earlier misbehaviour. There is no-one else at home, Auntie has gone out, if the phone rings it won’t be answered. This is one unfortunate young lady who is going to be very chastened indeed by the time her uncle has finished with her!
----//---- 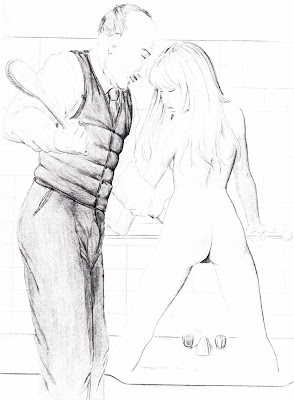 In contrast to the illustration of the girl being spanked in her bedroom, this tearful Miss is being disciplined purely for the gratification of her uncle. There is really no doubt about that, is there? She stands stark naked in the bath, her legs are splayed wide apart, she holds onto the rail not for support but simply because she has been told to do so. There is no part of her bottom and thighs that the brush cannot smack bright pink, and there is no other part of her that the other wandering hand cannot touch if it wants to. If the leer on her uncle’s face didn’t tell us that much, the fattening bulge in his trousers would betray his secret.
Little else need be said. Nothing will convince us that ‘Uncle’ is punishing this denuded young lady purely as a disciplinarian, and nothing could convince us either that this girl, who is so bravely taking her spanking despite the tears in her eyes, doesn’t know that this spanking in her bed-time bath is only a painful overture. Somehow we can be certain that this isn’t the first time our heroine has done her damp little dance at bedtime, and we can only leave her to whatever her fate may be.
----//----