The World Has a Bad Day

As does one of its younger citizens. Story from Blushes 1 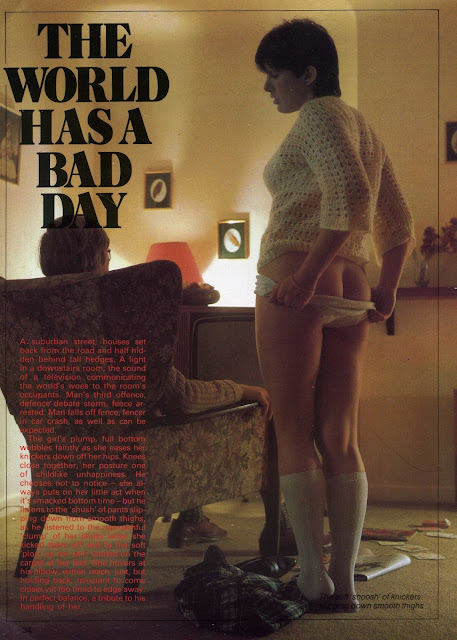 A suburban street, houses set back from the road and half hidden behind tall hedges. A light in a downstairs room, the sound of a television communicating the world’s woes to the room’s occupants. Man’s third offence, defence debate storm, fence arrested. Man falls off fence, fencer in car crash, as well as can be expected.

The girl’s plump, full bottom wobbles faintly as she eases her knickers down off her hips. Knees close together, her posture one of childlike unhappiness. He chooses not to notice — she always puts on her little act when it’s smacked bottom time — but he listens to the ‘shush’ of pants slipping down from smooth thighs, as he listened to the reproachful ‘clump’ of her shoes when she kicked them off and to the soft ‘plop’ as her skirt landed on the carpet at her feet. She hovers at his elbow, within reach, just, but holding back, reluctant to come closer yet too timid to edge away. In perfect balance, a tribute to his handling of her.


‘C’mon.’ He casts a sideways glance at her semi-nakedness, patting his knee. Her breathing sounds too fast, her response to the summons is too slow, but she comes reluctantly, knees pressing against his leg, then the weight of her body settles awkwardly across his lap. Her bottom swells warmly under his hand. 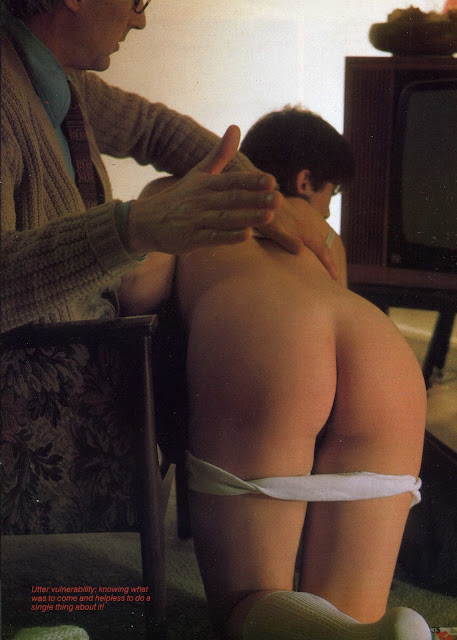 The remote control button switches off the sound of the newscaster’s voice; the girl watches the dwindling spot of light on the screen as she might have watched daylight fading into the distance as she fell into a bottomless pit. Fingers stroke the back of a thigh, loiter thoughtfully on the satiny skin, nudge her forward a bit across his knees, her response automatic, obedient, almost resigned.
The cup of his hand folds around the curve of her buttock with the familiar intimacy with which old friends might shake hands; in a way his hand and her bottom are old friends.
The half-remembered yet part-forgotten sting of the first few spanks never fails to take her by surprise, never fails to make her gasp a breath and push with her toes so that the soft press of her hips across his lap urges forward, the well-remembered lump under her tummy a reminder of her half-formed conviction that these spankings, now that she’s almost grown up, are less for the sake of her moral well-being than for the sake of his immoral gratification. The knowledge does nothing to lessen the smart in her bottom; it bounces up for the next hefty spank only because it can do nothing else, and the smack lands with practised accuracy and timing on the very crown of one bum-cheek. She pants a pointless protest and bends her knees as the sting seeps into her bum.
He spanks her with deliberate slowness, timing the descent of his hand to coincide with the faint hint of relaxation that eases through her bottom as the bite of the preceding slap loses its edge, so that for the girl the methodical series of spank after spank, each meticulously spaced in time, each reinforcing but not overwhelming its predecessor, blends into steadily intensifying tenderness that — as she well knows — will eventually push her beyond the limit of her self-control. With the spanks seeming harder each time, with her grasp of the true proportions of things beginning to slip and her awareness of sensation becoming progressively limited to an overwhelming pre-occupation with the pain in her bottom, the girl begins to flinch from imagined spanks, to jerk across his knees with an urgency that she hasn’t previously demonstrated, and to blubber incomprehensible words in between ‘Ooh’s’ and ‘Oow’s’ and sounds that seem to be ‘Nnnnghs’ or might be ‘Mmmmmnnghs’. 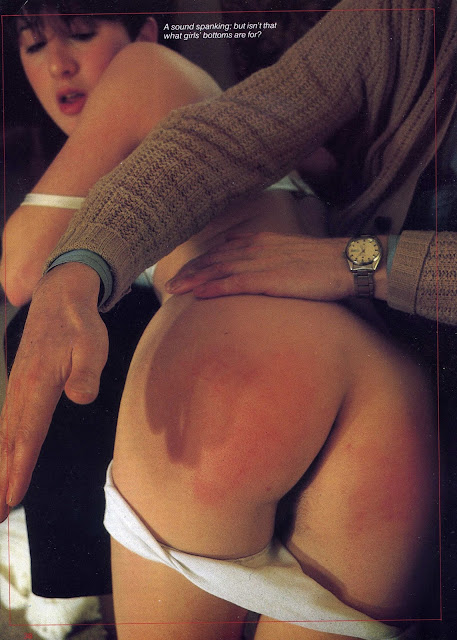 Having established an ascendancy over this wriggling, half-panicking girl, the man’s relentless approach to the business of spanking her modifies somewhat. Gradually the intervals between slaps lengthens, the severity of each spank is adjusted to just the pitch necessary to promote a sudden onset of squirming as it lands without prompting an extreme reaction that might interfere with the precarious balance between painful stimulus and the girl’s inbuilt reluctance, intuitive more than reasoned, not to accelerate her struggling to the point where she would become unmanageable. Teetering on this knife-edge, she slips into an almost ritualistic sequence of jerk, wriggle, gasp, pant, and jerk again as the next spank arrives.
He keeps her at it for minutes on end, until the horizons of her whole world narrow to a perception only of the pain in her bottom, and her awareness of time telescopes to encompass no more than the intervals between the arrival of one spank and the next. His calm voice, coaxing and almost understanding in its tone, chides her as though she were still a child. She hears herself sobbing that she will, she will, try to be a good girl in future. The promise is accepted; at last she is allowed to slip off his knees and stand there, half-naked weeping and trembling and touching ruefully at her bottom while he lectures her on what he quaintly calls ‘naughtiness’ and she, feeling no more grown up now than she did three, four, even five years ago, nods and whispers ‘yesses’ and stoops to pick up her clothes and runs upstairs for her bath, because it’s time she was in bed. 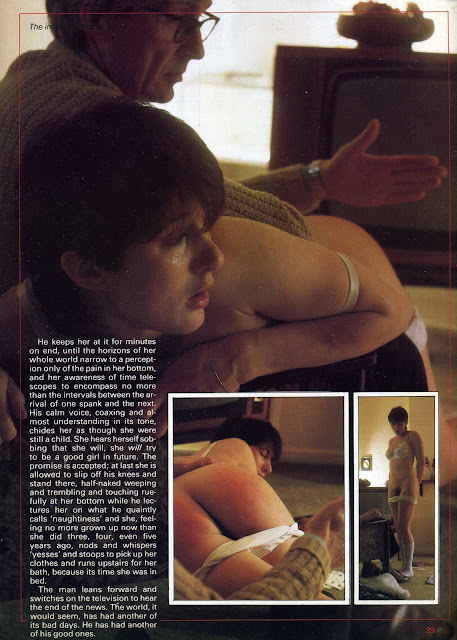