Albert gets confused. Story from Blushes 1 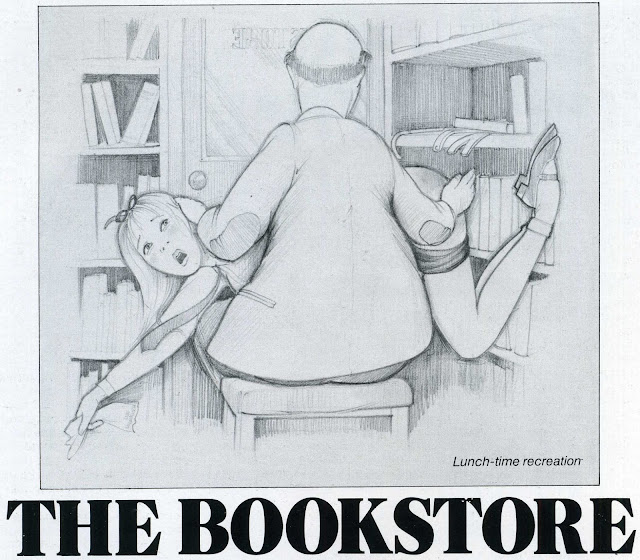 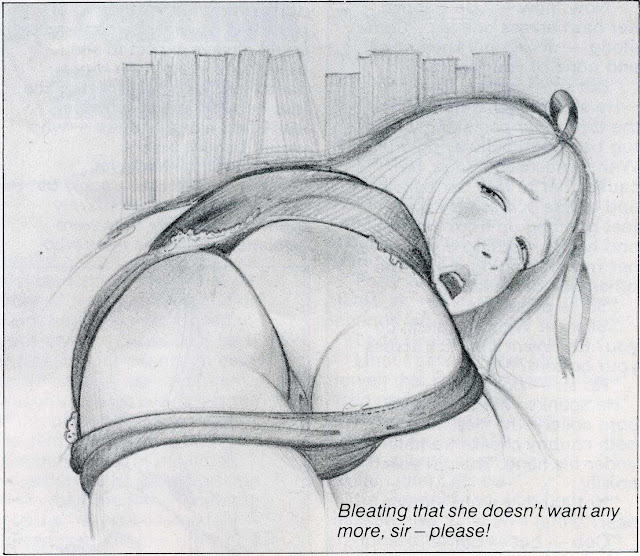 He slipped his fingers inside the top of her pants and with a tug had them halfway down. With a practised nudge, he caused her to lose her balance and topple across his knees, feet bobbing up from the floor and hands reaching out to save her from falling right over the other side of his lap.
‘Sir — please sir...’
‘Silence! Want the stick, do you? Eh? Want the stick across your bottom?’
‘No sir — no, please —’
He spanked her half-bared bum solidly, the slap making both chubby cheeks tremble under his hand. The girl yelled noisily.
‘Not another word, do you hear?’
‘Ooh — but — but —’
He had her knickers down in a moment, though she struggled as she felt them whisper to her knees. Another spank, with a final warning that there was to be no more of her wittering or she’d really be in trouble, and Mr Howell turned her skirt up across her back and smoothed his palm across the pert pushiness of her bottom. The girl lay nervously across his lap and twisted her head back to look up at him. She tried one last time.
‘Sir — please — Mr Flood sent me —’
A solid, expert spank cracked down on the crown of one buttock and a second slap stung the other cheek. Gasping with the smart in her bum, the girl’s protests finally subsided and she lay, tense and jittery, while the impudent upthrust of her bottom-cheeks was cupped, moulded, and stroked appreciatively by Mr Howell.
From the doddering teacher’s point of view, it mattered not at all that he had been unable to read the note the girl had brought, and that he therefore had not the faintest notion what degree of punishment would be appropriate. Over the years he had developed a simple philosophy with regard to the chastisement of erring schoolgirls; the really naughty ones tended to be no less disruptive whether they were punished severely or not — you could always expect to see them back again for a repeat dose in the course of time. The less naughty ones — that is, less-often-naughty ones — who would benefit from a punishment of whatever severity, would presumably be deterred the more effectively the more severely they were punished, while the ones who never got into trouble were never punished anyway, so they didn’t count. Stated simply, then, Mr Howell’s punishments took no account of the crime the girl had perpetrated — a damned good hiding suited all cases. 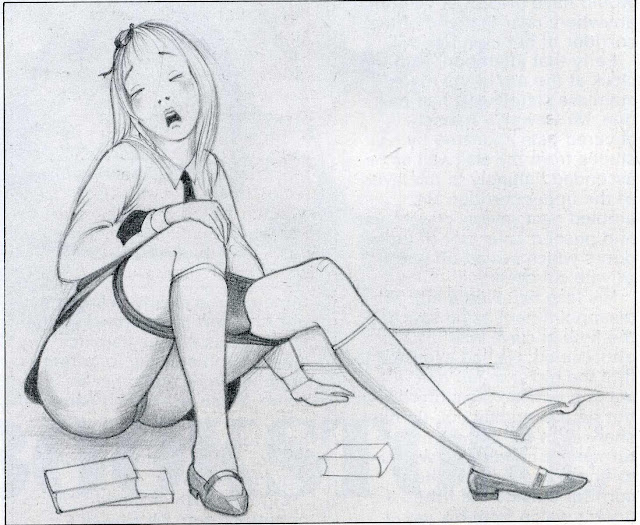 This point established, therefore, it stood to reason that the only decision to be made was the method of punishment, and if appropriateness was not a factor to be considered, then the only thing left was the rendering unto the punisher of the maximum satisfaction from the opportunity provided.
With the foregoing principles in mind, Mr Howell spanked the girl across his lap — the decision to spank her rather than employ another method had to do with the fact that he couldn’t rouse himself sufficiently on the spur of the moment to get to his feet until her wretched, helpless bottom was an undulating wobble of frantic squirmings and involuntary jerks, and the sobs wrenching from her lips told him that her earlier bravado had now quite evaporated. Having achieved this minor objective, Mr Howell continued to spank her anyway for the therapeutic value it afforded him, until he could contain her struggles no longer and she slid to the floor a blubbering wreck.
Too breathless by then to speak, Mr Howell simply waved her to her feet and out of the door, through which she exited backwards, her face a grimace of fearfulness.
Mr Howell took a pill and remained in his chair until the trembling had subsided, then he heaved himself to his feet and walked slowly to the door. He quite forgot to lock it or even to close it as he left, and he went haltingly down the corridor as the bell rang for the end of the lunch break, wondering idly, whether it was going to be the exertion of spanking young, healthy girls or those damned stairs which would kill him.
Back in the bookstore, Mr Flood’s note lay unread on the floor ‘Dear Albert, knowing your knack for forgetting to remember, may I remind you of the detention duty you said you’d do for me this evening? Thanks, in anticipation.’
The story continues in Detention Room
Posted by Fleas63 at 23:10